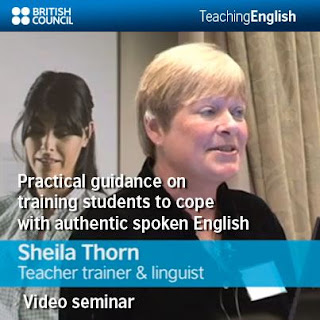 This was the title of a recent British Council Teaching English seminar presented by Sheila Thorn and what follows is a summary of what she had to say.


Sheila began with a question:


Why are listening comprehension exercises in coursebooks not representative of informal spoken English heard outside the classroom?
A quote from Michael Rost:
'There is a distinction between learning to listen in the L2 and learning the L2 through listening.'
Coursebooks are all about learning a language through listening, but it is better to learn to listen in an L2 as a specific skill.
Critique of the traditional listening comprehension approach
The challenges of spontaneous speech
Spontaneous speech is easy for us as native speakers.  It's automatic.  For language learners, though, it's rather more difficult.  As Gillian Brown says:
'Every consonant and every vowel will be affected by its neighbouring consonants and vowels and by the rhythmic structure in which it occurs.'
You don't get dictionary-like, carefully articulated words in a stream of speech.  Something happens to them.  Ellision causes problems for listeners. 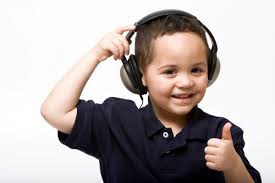 Some solutions to the problem
Gapping
Gapping key lexical/content words in a stream of speech is highly effective.
Dictation
Free-style 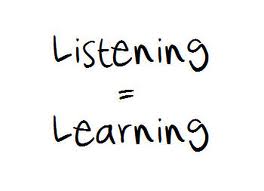 You could go on to a traditional comprehension exercise if you like, but this kind of activity reflects what happens in authentic listening.﻿
Posted by Andrea at 08:12