The difference between written grammar and spoken grammar

This was the title of a webinar I attended back in June.  It was hosted by Cambridge English Teacher and the presenter was Mike McCarthy.  It seems strange to be writing a summary of it so long after the event, but I made detailed notes at the time and recently re-read them and was reminded of how useful a webinar it had been.  So, here goes!

Questions to ask
First, we need to find evidence of differences.  When we look at corpora, there are anomalies (differences).  We can make frequency lists of these using specialist software.

We can then use a corpus to develop a descriptive grammar - how the grammar is used in reality.  We are looking for consistent phenomena of usage across geographical regions, all social backgrounds, both genders, and all ages.  If we find something consistent across all users, it is grammar in common use. 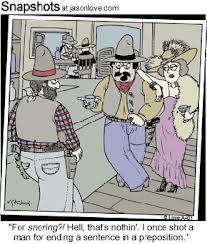 Before we had corpora we had codified rules - grammar rules handed down through the generations; a set of rules that we are taught is the right way to use the language.  Now, with corpora, we also need to take into account cases where these rules are broken.  If enough people are breaking the rules, the rules are wrong.  Think about the city and map analogy.  We change the map to fit the city, not vice-versa, and this is what we should be doing with grammar.

Though/Although - both of these are correct gramatically, but, in the spoken form, though is six times more frequent than although.  Why is this?  It's not enough to say 'it's shorter and easier to say' or 'it's only one syllable'.  We need to analyse it a little more.

Though is the 175th most commonly used word in British English and the 190th in American English.   (It should be noted that if a word is ranked 1 to 2000, it is very important - we can't do without it.)

There are two parts of spoken grammar:
Though has two meanings - therefore, it is used more.  It can be used at the very end of a sentence.  So, it's greater frequency may be due to its flexibility.  Using though at the end of a sentence is very rare in written English.  (Form)

Though is also much more commonly used to resume a conversation which has been interrupted.  (Function)

This is evidence of a difference between spoken and written grammar. 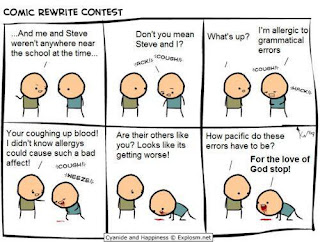 We don't notice what we say in the same way as we do when we write.  By using corpora, we see how people really do speak and not how we think they should.

The 100 most common words in written grammar are prepositions, pronouns and articles - the small words which give correct grammatical structure to sentences.  In spoken English, many of the top 100 words are verbs.

A similar situation arises with the verbs, 'see' and 'mean'.

In spoken language, we have common knowledge - gauging what the other person understands, sharing a common view.  Spoken grammar needs the function of constant checking which isn't necessary in writing.  If we don't check, we speak in monologue rather than dialogue.  So, we constantly use checking phrases like 'Do you see?' or 'You know what I mean'.

Another illustration is absolutely which appears four times more frequently in spoken than in written English.  In spoken English, absolutely is used as 'yes-plus' - as a stand alone sentence.  It is used as an engaged yes or an interested yes - it turns you into an active listener rather than a robotic one.  It can also be used in the negative - absolutely not - increasing its frequency considerably.

In conversation, people have no difficulty understanding such things as: 'His cousin in London, her boyfriend, his parents, bought him a car for his birthday.'  Such constructions with multiple subjects and lots of different noun phrases are not found in writing.  When we write them down, they look strange, but in speaking, they sound fine.

This is a native speaker example from the BBC:

'And my grandmother, I've never forgotten, when we were small, my sister and I, she used to take us down and we'd sing to the seals.'

This was said by an educated person and demonstrates that it's perfectly OK in spoken English for the subject to apparently be unclear.  In fact, this structure is deemed to make the speaker sound friendlier.  That's probably what Prince Charles had in mind when he said it!!

How to teach spoken grammar
In the real world, native/non-native interaction is often a problem.  This is largely due to badly taught English.  Most ELT worldwide is based on written grammar.  As teachers, we need to give students the awareness and the confidence to use spoken grammar.


'There's four restaurants in this street.'

Everyone says it, so it's correct!

The problem is in knowing if it's a one-off or if it's accepted use.  This is our challenge as EFL/ESL teachers.