The Thrill of Student Agency in Classroom Management

This was the title of the first presentation of the recent Cambridge Day I attended.  The speaker was Tim Murphey and what follows is a summary of his workshop.
Tim began by defining his terms and explained that, in this context, ‘agency’ meant ‘control’ or ‘choice’.  He went on to hypothesize that:
agency        +        altruism     =        thrill
In other words, giving people the choice and the control to be able to help others is thrilling, exciting and, ultimately, fulfilling.  If we can pass on this thrill to our students, then they will be helping themselves and each other.
As an example of this, Tim gave us a speed dictation which, in a language classroom, would be too difficult for an individual student to write down by themselves.  The aim, therefore, is to get students to collaborate, both before the activity by deciding what each of them is listening for, and after, by helping each other to fill in what they’ve missed.
The main thrust of Tim’s presentation was the importance of student curiosity to keep them engaged and make them want to learn.  He suggested using split stories, beginning the lesson with a story, but leaving the punch line until the very end of the session.  Pique the students’ interest and then leave them wondering until the dying moments of the lesson.
As an alternative to a story, you could ask a philosophical question at the beginning of the lesson and answer it at the end.  The example Tim gave was, ‘Why is a turtle trying to fly more beautiful than a bird sitting in a tree?’  The answer – because the turtle is striving for something beyond its present capabilities.  This is what we are trying to inspire our students to do!
When students are asked questions, it makes them curious; just giving them information is like water washing over rocks – it doesn’t sink in!  (I love this analogy!)  It’s imperative that we, as teachers, cultivate curiosity in our students.  This idea is supported by anthropological study.  Consider this question:
Why did we stand up 6,000,000 years ago?
a)    To reach more food.
b)   To reduce the body’s exposure to the sun.
c)    Because we were curious and wanted to see further.
All three possibilities have some truth to them, but the third seems to carry the most weight with anthropologists.  Humans are curious by nature and because of this curiosity altruism came to the fore.
Let me explain.  As a result of us standing up, the birth canal in females became narrower provoking earlier birthings – at nine months instead of thirteen.  Babies were born, and still are, prematurely.  Caretakers, therefore, had a longer and harder job in that they had to spend more time with their babies.  There were positive consequences of this, however:
Ø  There was increased emotional bonding between babies and caretakers.
Ø  There was increased communication – the beginning of real language came out of parental babbling.
Ø  There was a more rapid development of cultures and communities – the advent of slings, babysitting and the beginning of mutual aid in the form of midwives.
So, this was the beginning of altruism and we already know that humans have innate curiosity.  Now, Robert Sapolsky, a neuroscientist, added to our knowledge with his ‘signal – task – reward’ theory.  He argued that humans respond to a signal to fulfil a task in the expectation of getting a reward.  This reward doesn’t need to be a physical prize.  Merely fulfilling the task is reward enough because it triggers a dopamine rush to our brains.  If challenge is added to the equation, then it is even more motivating – it is exciting; there is an element of risk.
So, how do we use this to advantage in our classrooms?  Well, by changing activities frequently – every five minutes for young learners and lower levels.  This increases the number of times students can expect to get the dopamine rush and so it keeps them highly motivated.
This is all very well, but we need to remember Maslow’s hierarchy: 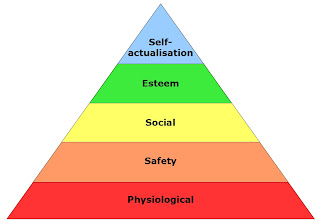 In other words, people’s basic needs of food, water and shelter are paramount and need to be satisfied long before they can self-actualise or learn.  Two billion people still live in the bottom level and if we can’t lift them out of poverty, then they can’t learn.  We need to help these people so that we can help ourselves for the good of mankind.  A noble thought and not one that necessarily has practical application in our daily lives, but, nevertheless, something to bear in mind as we teach.
So, what gets students motivated and keeps them motivated?  Motivation triggers neurons in the brain:

We produce mirror neurons; that is, to understand what other people do, we imagine ourselves doing it. These are empathy neurons. In the classroom, therefore, near peer role modelling (learning from people most similar to ourselves) is really effective.
Darwinism talked about collaboration, and even cross species collaboration, as having a bonding effect. It put forward the idea of ‘social capital’ – people of like minds working together – and of ‘bridging social capital’ where different types of people work together. In the language classroom, this manifests as cross-age or cross-level teaching.
Social evolution, therefore, can be summed up as:
CURIOSITY > CARETAKING > COMMUNITY > AGENCY > ALTRUISM
Examples of this in the real world are:

· Wikipedia – the online collaborative encyclopedia
· The increasing number of NGOsoperating globally
· The growth of micro-financing
In the classroom, we need to encourage students to help each other. We can ask them to write their ‘language learning histories’ and publish them for others to read. By giving each other hints and tips we give all of our students agency which, when combined with altruism, gives them the thrill of learning leading to effective, measurable outcomes for students and teachers alike. We provide value added education!
For further information, see Tim Murphey’s videos here.