Goal number three of Shelly Terrell's fourth cycle of her 30 Goals Challenge is to choose a personal theme song.  Shelly began her own blogpost on this  with a quote about music, and I'd like to do the same:


“Music gives a soul to the universe, wings to the mind, flight to the imagination, and life to everything.” – Plato.
The type of music I enjoy would surely be unrecognisable to Plato, but the sentiment behind his words still resonates strongly with me.
Music has always been a huge part of my life.  My Dad loved popular music and some of my earliest memories of my childhood involve him belting out his favourite tune of the moment while my Mum begged him to put an end to 'that racket'!! :-)
Moving on from my Dad's choices (though I have to say some of them remain favourites of mine to this day!), my musical influences were those of my peers.  I was never one to want to stand out from the crowd, so, along with every other young girl in the UK in the seventies, I loved Donny Osmond, David Cassidy and the Bay City Rollers!!  Later, I did become a bit cooler, especially when I went to university in Manchester in the eighties and discovered great bands like The Cure, The Clash, The Smiths, The Housemartins, etc. etc.
So, there has always been a musical soundtrack to my life and, being an EFL teacher means that I can also bring my love of music into my work setting by using songs in the classroom - some of my best lessons over the years have involved music to some degree.  Choosing one personal theme song, then, has proved somewhat problematic, so I've cheated and chosen two!
The first is 'Something Inside So Strong' written by Labi Siffre, a British singer songwriter who was inspired to write after watching a documentary about apartheid in South Africa.  It became a hit in the UK in 1987, while I was at university, and was soon adopted as an anthem of the campaign to secure the release from prison of Nelson Mandela.  It has been used in other campaigns since, notably by Amnesty International.  It remains inspirational to me - I can't hear it without thinking back over all of those years to my political awakening.
My second choice is 'Proud' by Heather Small.  I've always loved Heather's voice and she has made a habit of recording inspirational songs.  When she was lead singer of M People in the nineties, she released 'Search for the Hero Inside Yourself' which includes these lyrics:
﻿
And that's why (why) you should keep on aiming high
Just seek yourself and you will shine
You've got to search for the hero inside yourself
Search for the secrets you hide
Search for the hero inside yourself
Until you find the key to your life
In this life, long and hard though it may seem
Live it as you'd live a dream
Aim so high
Just keep the flame of truth burning bright
The missing treasure you must find
Because you and only you alone
Can build a bridge across the stream 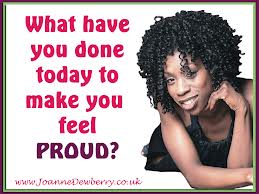 It's a great song, but not the one I've chosen!  As a solo artist, in the year 2000, Heather recorded 'Proud'.  I loved it from the first time I heard it.  The lyrics carry so much meaning.  The song was later adopted by Oprah Winfrey as the theme tune for one of her shows and, later still, by the Olympic Committee for London 2012.  These two facts would normally put me off a song, but, I can't help it, I still love it!!  The question, 'what have you done today to make you feel proud?' is great - it's not about other people - it's about you being proud of yourself!
I hope you like my choices!﻿
﻿
Posted by Andrea at 09:44