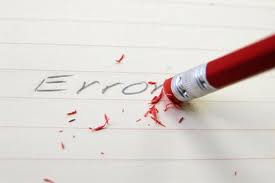 What follows is a summary of a recent webinar on errors and error correction by Robin Walker.

As teachers, we are far too ready to put a red pen through something.  In reality, we can't second guess our students and it is presumptuous of us to correct their writing to what we think they were trying to say.  Look at this example of a student's writing:
We feel so duty-bound to correct that we over-correct, but any error correction is ineffectual if we don't know for sure what the student wanted to say or what caused the error.

It's a good idea to use a writing error correction code to encourage students to self-correct.  This is the one we use in my institution:

Whichever code we use, we must remember to use the ? more!!  If we're not sure what the student meant, then we need to simply use a ? and ask our student to explain what they were trying to say.

What can we gain from classifying errors?  Well, it certainly helps to concentrate our minds.  We could, for example, consider two types of error:

LOCAL - e.g. 'They fly to all of the countrys in that area.' - We can ignore local errors.

GLOBAL - e.g. 'What to have abridgement about of the what I did last week.' - These errors impede comprehension.  We should put a ? and go back to question the student.

This scheme of two types of errors doesn't work, though - it's not sophisticated enough. 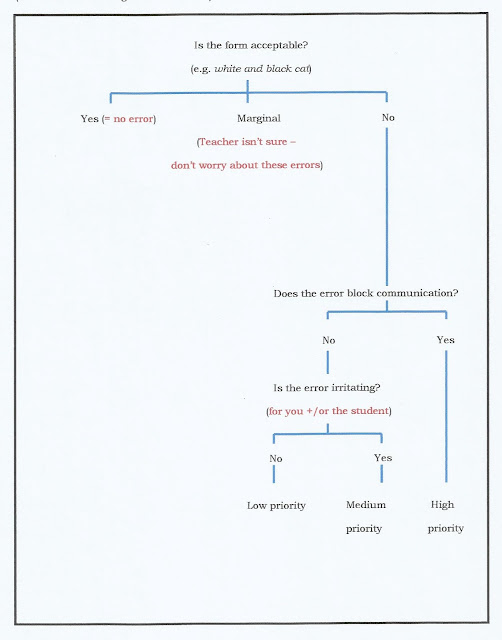 This is the scheme to have in your head when you're monitoring around the class or when you're marking writing.
Correction methods
a)  Repeating the error
b)  Writing the correct version above the error
c)  Using error codes to indicate the type of error
d)  Reformulation/recasting
e)  Using some sort of gesture to show where the error is
f)  Leaving a slip of paper with the error written on it
g)  Making a note of errors and treating them later
h)  Treating common errors at the end of the class
i)  Limiting correction to certain types of error
j)  Ignoring the error 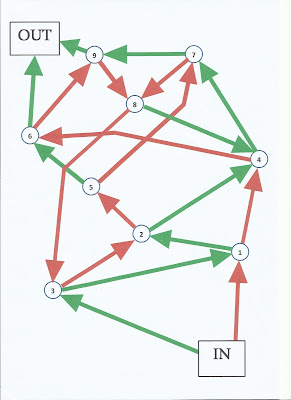 
Students categorise their own mistakes as follows: